Espresso 77 Hosted Art and Live Music Through Nemo Blizzard – Amidst closures and last minute cancellations Espresso 77 shined as a beacon of defiance to the extreme weather conditions by hosting a packed art opening accompanied by live music. It was attended by both local Jackson Heights residents and people who traveled from afar to be a part of what was undoubtedly one of the most memorable evenings to say the least.

Needless to say Armen Kojoyian’s exhibit titled La Luz Del Bajio was a tremendous success which was only aided by the declining weather conditions. The musical element added by Armen Meschian was also amplified by the addition of bassist Ariel De La Portilla and vocalist Nicole Guerra to the bill. Wine and coffee poured in abundance, art filled the room, musicians played into the night while Nemo unleashed his wrath upon the world.

Rain, blizzard, or shine, the doors of Espresso 77 are always open. Come in! 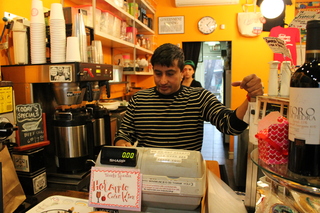 JACKSON HEIGHTS — As New York prepared for the worst of Winter Storm Nemo Friday, coffee shops  in Jackson  Heights perked up — even anticipating some extra business during the frosty  weekend.

Both Juju’s Bagel Cafe and Espresso 77, two popular coffee shops off of 37th Avenue on  76th and 77th streets, respectively, shrugged off the idea of storm  preparation.

At Espresso 77, owner Afzal Hossain, 37, even said that a photography event  planned for Friday night would go ahead without a hitch.

“That’s the panic of the New York media,” Hossain said. “We didn’t see the  snow all year, so that’s why people are worried.”

During Hurricane  Sandy, which left Jackson Heights largely untouched, Hossain said business  at the coffee shop was booming, because many people took off from work.

He expects much the same this weekend, with New Yorkers braving the cold  weather for a warm beverage.

Elsewhere, Jackson Heights and Elmhurst residents dealt with the coming storm, and some of  its immediate repercussions.

Riders on the 7  train, one of the main conduits for locals to get to the city, faced rush-hour delays Friday morning. Although the majority  of the line runs outdoors, an MTA spokesman said the delays were not caused not by signal  problems, but instead said commuters may have taken longer to board the train  because of the slippery weather.

And late Thursday, Councilman Daniel Dromm announced that the Elmhurst Lunar  New Year Festival, which was to feature the first-ever neighborhood Lunar New Year Parade, was  postponed because of the snowstorm, which could bring more than a foot of snow  to the city.

At Trade  Fair on 37th Avenue and 75th Street, and across the street at the Met  Supermarket, the aisles were packed as early as 9:30 a.m. with hurried customers  looking to get in some last minute grocery shopping — just in case.

“I usually buy on Friday, but not this early,” said Andrew Hillard, 72, who  works as a security guard. “I came early because of the weather.”

A few aisles over, retiree Rolf Fleischmann, 50, was also skeptical but  cautious as he stocked up on soup in the event that his family got snowed  in.

“I don’t believe everything will be closed,” Fleischmann said. “But err on  the side of caution.”