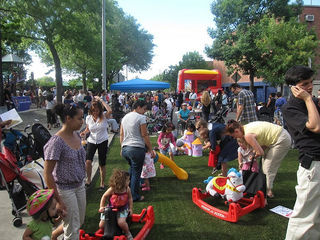 NEW YORK CITY — Jackson Heights is about to get a little more open space.

The city recently announced that it had acquired a nearly 25,000-square-foot piece of asphalt playground that will be turned into park space, according to Parks Department officials.

The $6 million purchase of the yard at 33-16 79th St., owned by the private Garden School, expands nearby Travers Park.

“Jackson Heights is one of the most densely populated and diverse neighborhoods in New York City, and one most in need of parkland for its community,” Parks Commissioner Veronica White said in a statement.

The acquisition comes as plans are in the works to revamp the long-dormant Dunningham Triangle in the open space-starved neighborhood.

It also represents the first time the city has made such an arrangement with a private school, the Parks department said.

“The purchase of the Garden School athletic field means that a park-starved community like Jackson Heights will get to preserve precious open space and have the opportunity to almost double the size of the neighboring [Travers] Park,” he said in a statement.

During the next five years, the public will be able to access the space outside school hours, while the school will continue to maintain the area.

A playstreet has been held on 78th Street for the past several years between the school and the park, in a bid to give neighborhood kids more access to outdoor space.

Final designs for the play area, which will be separated from the school’s remaining property, are being developed, Parks officials said.